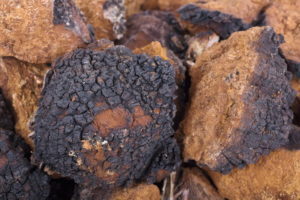 First, here’s a short list of fun facts about Chaga:

1. Where to Find Chaga
Chaga mushrooms are easy to identify in the wild forest. They grow on birch trees in very cold climates such as Russia, Canada, and Alaska.

In this picture to the right, you can see Chaga mushrooms growing right on the tree. These mushrooms love birch trees but also grow on alder, chestnut, and beech trees.

In order the harvest the mushrooms, you would have to climb up the tree to collect them – carefully – without falling off the tree. It’s actually quite hazardous!

2. Chaga is sometimes called a “tree cancer” because it can take over the whole tree, stripping it of its nutrients. When this happens, the host tree will die. Interestingly, there’s a concept in herbology called the doctrine of signatures. This concept states that whatever something looks like – or acts like – in nature is what it can be expected to do in the human body.

Chaga mushrooms won’t take over your body and kill you, but they could be instrumental to curing cancer in some cases. The “tree cancer” is potent enough to destroy human cancers. You’ll learn about some of this research later.

3. Some people call chaga mushrooms “black gold” because the outside of the mushroom looks like burnt charcoal. The inside is yellow-orange.

However, sometimes Chaga mushrooms grow so large that they can be as big as a soccer ball or a human head!

Check out the pictures to see this with your very own eyes.

4. Just because your doctor doesn’t know much about Chaga doesn’t mean other people walk in the same shoes.

Mushroom experts, botanists, medicine men, and Chinese Oriental Medicine doctors are savvy about these botanical treasures and their value to mankind.

Even historical experts know about chaga and how it was used as a coffee substitute during both World Wars.

If a plant – or mushroom – works on your liver, helping liver cells to purify themselves and strengthens them, your health benefits are much greater than for a plant that does not do this.

Korean scientists reported in 2015 in the International Journal of Medicinal Mushrooms that making a tea of Chaga and drinking it can be helpful if it’s done before liver toxins attack the liver.

Liver toxins will increase levels of liver enzymes such as ALT, AST and LDH, generate huge amounts of free radicals and greatly alarm your doctor that your liver is failing. Liver toxins also create a chemical called malondialdeyde, which will potentiate free radicals to the level that they become atomic bombs in the body, multiplying their effects exponentially.

The Korean scientists found that rat liver cells pre-treated with Chaga tea were protected significantly from intentional damage with a liver toxin called tert-butyl hydroperoxide, even at low concentrations of the medicinal mushroom.

It’s possible that waiters and waitresses in Korea are now talking about this study to their restaurant customers since some of these scientists were from the Department of Hotel Culinary Arts and Nutrition at Kaya University.

Liver toxins aren’t the only thing that Chaga picks a fight with. Lurking in cat litter boxes inside homes in the U.S. and across the world is a parasite called Toxoplasma gondii.

It can play havoc with an unborn baby if the mom breathes it in. Toxoplasma gondii infections affect the liver and can cause schizophrenia, depression, and anxiety.

It’s considered a big threat to pregnant moms because the infection can cause miscarriage, stillbirth, and damage to the baby’s brain and internal organs. But before you start disciplining Kitty and taking this all out on the beloved cat, you should know about the effects of Chaga and the infection.

Chinese researchers at Yanbian University found that the liver damage in the mice infected with the parasite was alleviated with Chaga partly by its anti-inflammatory effects and partly by its activation of antioxidants to scavenge free radicals through the Nrf-2 pathway.

So sipping a cup of Chaga tea can reduce the anxiety you may feel every time you pet your indoor cat or change that dirty litter in a few different ways.

Many people fear the day that they will be diagnosed with Alzheimer’s disease or dementia. Perhaps they have watched an elder in their own family or the family of a friend go downhill mentally quickly, or maybe they even went so far as to get a genetic test done that tells whether or not someone is susceptible to Alzheimer’s disease.

Nevertheless, researchers may have had similar fears because they tested the effects of Chaga at the Department of Neurology at The Second Hospital of Jilin University in China.

Their laboratory tests on cells found that incubating cells for three hours with Chaga polysaccharides taken from a tea extract was exceptionally beneficial.

It reduced the damage and cell death from glutamate toxicity and restored the mitochondria while squelching the free radical accumulation. This was a big win for the scientists and doctors!

Next they gave mice that were genetically prone to develop Alzheimer’s disease the Chaga polysaccharide for eight works. Bingo! The mice that were lucky enough to get the Chaga had improved behaviors related to memory and cognition compared to those that didn’t.

Upon autopsy, there were a lot less beta-amyloid peptides and neuronal fiber tangles in the brain that are usually synonymous with dementia.

The Chaga also stimulated the Nrf2 pathway, which is the master pathway for turning on free radical scavenging in the body. The doctors reported that Chaga is protective against Alzheimer’s disease.

Stimulating the Nrf2 pathway and repairing the mitochondrial pathways in the body are two very important anti-aging strategies that many researchers are talking about today – and here you have a medicinal mushroom Chaga that is capable of working both ways in the body. This is why it’s such a botanical treasure.

Patients with Alzheimer’s disease are often given the medication called Tacrine. Unfortunately, Tacrine causes liver toxicity and kills off liver cells with high amounts of free radicals and disrupting the mitochondria.

Doctors and Ph.D.’s at the Occupational and Environmental Health Department at Dalian Medical University in China reported in 2019 in the International Journal of Medicinal Mushrooms that the polysaccharides of Chaga inhibited the death of liver cells caused by Tacrine. It did this by its antioxidant effects and mitochondrial restorative effects.

Diabetes is everywhere these days. A few decades ago, you could talk to a room of 100 people and only 1 or two of them would have diabetes. Now, in that same room of 100 people, you’ll find that over half of them have pre-diabetes, metabolic syndrome or full-blown Diabetes Type 1 or 2. If you keep asking the group questions, you’d find that everyone in the room has a family member or friend (or themselves) that have diabetes.

Chaga mushroom, according to the Chinese researchers at the pharmacy department at Tianjin University, has anti-diabetic effects even when a high fat diet is eaten. High fat diets tend to make diabetes worse.

In the research world, if you want to show that something affects diabetes, you start out with lab animals and give them an injection of a certain type of mold called stretozotocin. It always causes diabetes.

They discovered that the blood sugar regulation effects were most likely due to influencing the P13K-Akt phosphorylation signal pathway, for those of you that want more specific answers. Chaga might be a promising functional food or drug candidate for diabetes treatment, they stated as their conclusion.

Doctors at the Jiangxi Medical College in China must have been rejoicing when the results of their study were finally released in 2019. They cracked the case of how Chaga was working its anti-cancer wonders.

First of all, they reported that the helpful polysaccharides in Chaga make up about 70% of the tea extracts. That’s good for us to know because we can rest assured knowing that there are plenty of these polysaccharides in every cup of tea we drink.

Only a small dosage of 50 mg/kg Chaga significantly inhibited the lung tumor growth and increased the number of lung cancer cells that died.

Their conclusion was that Chaga acts on cancer cells through a mechanism by which AMPK triggers the cell death (apoptosis) pathway via the opening of the mitochondrial permeability transition pore. This reduces MMP, which then stops the ATP energy that feeds the cancer cells. They believe that Chaga is a promising alternative or supplementary medicine for cancer therapy.

In another study on Chaga and cancer and its anti-tumor activities, Japanese researchers tested two types of mice, each with cancer. The first group had lung cancer and the second had lung cancer that had metastasized or spread to other parts of the body. They gave the mice only 6 mg/kg/day Chaga, an amount they said that was equal to what was usually consumed in a Chaga cup of tea in Japan. The mice had the herb for three weeks.

During those three weeks, some amazing results unfolded. The tumors in the lung tumor group began decreasing and reached the level of 60% tumor reduction. Wow, that’s excellent and better than any type of modern medical treatment these days. But there’s more. In the mice that had the metastases, the number of new cancer nodules decreased by 25%. The blood supply to those new tumors was essentially drying up.

The Japanese scientists celebrated that Chaga could be used as a natural remedy for cancer suppression.

Chaga already has positive benefits that have been documented by top researchers at many institutions around the world. Now that you are aware of some of them, it’s your decision. Will you start drinking some Chaga tea and suck up some of the benefits? 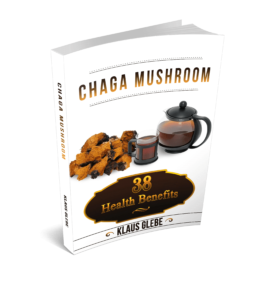 Register now to get the free E-Book